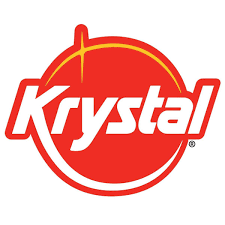 Krystal, the oldest fast-food restaurant chain in the American South (and second-oldest in the United States), is based in Chattanooga, Tennessee. The company has more than 450 restaurants, most franchise-owned, in Alabama, Arkansas, Florida, Georgia, Kentucky, Louisiana, Mississippi, North Carolina, South Carolina, Tennessee, Texas and Virginia. The restaurants have become known for their sparkling clean surroundings, friendly service and fresh, delicious food. It’s difficult to find someone who lives in the South who has not enjoyed a delicious Krystal meal.

Krystal Franchise Opportunities – History
Krystal was opened amid hard financial times, in the beginning of the Great Depression, 1932, at the corner of Seventh and Cherry Streets in Chattanooga, Tennessee. Founders Rody Davenport, Jr., and J. Glenn Sherrill believed that despite economic upheaval, people would frequent a restaurant that was spotlessly clean, provided courteous service and offered a good meal and a good price. The restaurant became an overnight success, known for its Krystal square burgers and yummy French fries. Among the first restaurants to serve food ‘to go,’ Krystal opened its first drive-through window in the 1950s and the restaurants retain that feature today.

Legend has it that Krystal co-founder, Rody Davenport Jr. was traveling in the northern states during the great depression and ate a White Castle restaurant. Impressed with the low cost, clean restaurant and efficient staff he headed back to his home town of  Chattanooga, TN and partnered with co-founder J. Glenn Sherril to open the first ever Krystal Burger in October of 1932.

Talk About a Super Focused Menu

In their early days White Castle has a small menu offering just the small square burgers, coffee or Coke to drink and apple pie for desset. Remember this was during the Great Depression so value was paramount. Krystal focused even tighter offering just two items… a burger for just $.05 each and good coffee.

While both restaurants’ menues have expanded their small, square burger sliders have not changed much. Over time the only evolution has been to add pickels, onions and the optional slice of cheese. Krystal did start adding mustard as well.

What’s in the name Krystal?

While many have believe that similar to Dave Thomas naming Wendy’s after his daughter, one of the co-founders must have had a family member named Krystal right? Actually not. During that time not all restaurants were actually that clean but Krystal founders were obsessed with cleanliness! Legend has it that Rody Davenport Jr’s wife referred to a friend’s crystal ball, “clean as crystal” which lead to the name. Just to mix things up a bit they used a K instead of a C.  The little point at the top of the Krystal logo is said to represent the inspiring crystal ball.

Funny that today the terms fancy and fast food are almost oxymorons but as Krystal’s menu grew to include other items they served their food on porcelain plates while most fast food establishments had come to adopt carboard and paper wrappers. Obviously due to overhead and the massive explosion of take-out and drive through orders they moved away from fancy plates in the late 1950’s.

Who Loved Krystal? The King!

Elvis Presley and friend and promoter DJ Dewey Phillips loved Krystal burgers. In fact, according the Priscilla Presley they would often buy as many as 100 burgers at a time to share with band mates, friends and family.

Food eating contests are certainly nothing new and while probably the most famous restaurant chain eating contest is the Nathan’s hot dog eating contest, Krystal had its own as well. According to some the first unofficial eating contest was actually among Krystal’s first two customers ever! Currently food eating machine Takeru Kobayashi holds the Krystal record of 93 burgers in 8 minutes.

While many believe that MacDonald’s was the first major chain to offer free wi-fi to its dining customers, according to QSR Magazine, Krystal was actually the first. In 2003 Krystal launched the first Krystal Hotspot and by 2006 had rolled this out to all locations.

The Champs in Accuracy

According to QSR Magazine, while Krystal lagged in drive-thru speed with average wait times of just under 4 minutes, Krystal did hold the title of most accurate. 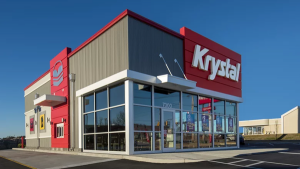 The Future of Krystal

In 2020 Krystal filed for bankruptcy due to an unmanagable amount of debt but within a matter of months was brought out of bankruptcy after being purchased by Fortress Investment Group for an estimated $49 million. After making significant leadership changes Krystal is poised to take the fast food industry by storm with expansion plans well beyond its traditional south eastern states and different buildout models ranging from small footprint stores to drive-thru only models.

If you have ever considered a fast food investment now could be the perfect time to take a look at a Krystal Burger Franchise!

Are you interested in owning a Krystal Burger Franchise?

A Krystal Burger can be a great franchise investment. Here are some investment details.