The Big Mac, McDonald’s most iconic burger and arguably the most iconic burger in the world was invented in 1967 by a McDonald’s franchisee, Jim Delligatti who owned several franchises in the Pittsburgh, PA area. Legend has it that Delligatti originally created the Big Mac to satisfy the hungry appetites of local steel workers who he felt were not being satisfied by the smaller hamburgers that McDonald’s sold at the time. While at first, Ray Croc and the team at McDonald’s corporate did not allow Jim to sell this non-standard menu item in his store they were also facing the challenge of competing with larger burgers from Big Boy and of course The Whopper which was rapidly making Burger King a formidable competitor, so eventually conceded. The Big Mac became very popular so McDonald’s rolled it out to all locations in 1968. 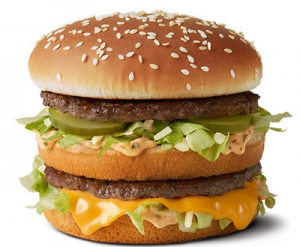 The Big Mac was originally going to be called The Aristocrat and then The Blue Ribbon burger until one morning Esther Glickstein, an advertising secretary at corporate casually threw out the name, almost in passing, “how about the Big Mac”. Originally the top brass at McDonald’s scoffed at the suggestion, in fact Ray Croc was known to originally scoff at most ideas that were not his but eventually the name stuck.

What is on a Big Mac

The Big Mac is made up of 2 beef patties, shredded iceberg lettuce, one slice of American cheese, 2 slices of dill pickle, minced onions, three slices a sesame seed bun and of course the special sauce. The three slices of buns are 2 bottom slices and the top slice. Each top slice contains around 390 sesame seeds. The extra layer of bun was included to keep the sandwich from being so messy. While many believe the special sauce is Thousand Island dressing it is actually made from mayonnaise, mustard, sweet pickle relish, vinegar, garlic powder, onion powder and paprika. Today the special sauce is delivered to each location in canisters that utilize a “sauce gun” ensuring the exact amount of sauce goes on each burger with a single squeeze. The special sauce has undergone a few slight variations over the years. 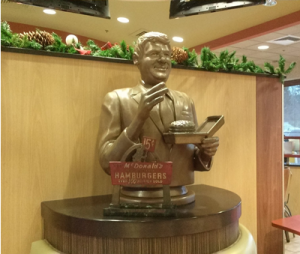 The Big Mac is McDonald’s second best selling item of all time, second only to their French fries. McDonald’s sells around 1 billion Big Macs each year worldwide. Despite being a multi-billion dollar invention, Jim Delligatti never received a penny of royalty or thanks for what is arguably the biggest contribution to the fast food world in history, but he did receive a plaque.

Connect With An Advisor